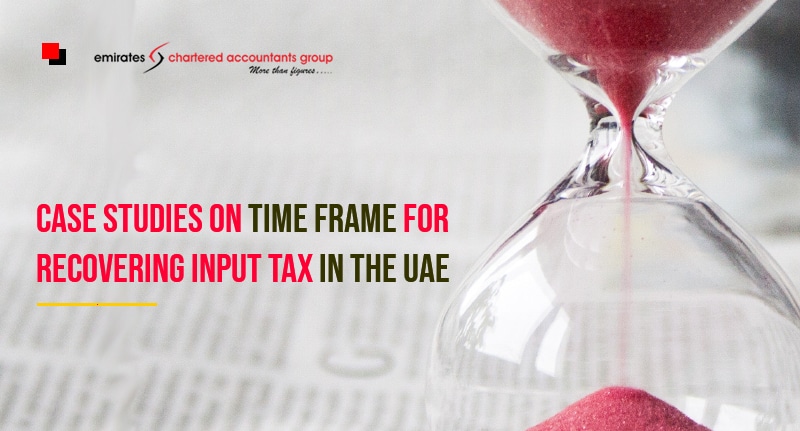 Time Frame for Recovering Input Tax in the UAE

The latest public clarification issued on the time frame for claiming input tax in the UAE provides the clarity that the input tax can be recovered in the tax period in which two conditions are satisfied:

Let us discuss in detail regarding the eligibility of recovering input tax in the UAE under different scenarios.

Company ABC is VAT registered on 1st January 2019 and is having quarterly tax period (Jan to March and quarterly) and filing VAT return quarterly. They have purchased materials worth AED 25,000/- which was delivered on 25th March 2019. But they received the tax invoice dated 25th March 2019 only on 15th July 2019. The accountant of the company is of the opinion it cannot be claimed as it is received late. Kindly advise the accountant on the VAT treatment required.

As per law it is the supplier’s responsibility to issue and deliver tax invoice to the customer within 14 days from the date of supply. For the recipient Law states that they can recover VAT input in the first period or subsequent period when the tax invoice is received and is paid or intention to make the payment is made, against a supply which is used for making taxable supply.

In the above example, the company did not receive a tax invoice along with material delivery on 25th March 2019. The tax invoice was received only on 15th July 2019 but was dated as 25th March 2019 which is the date of actual supply?

As per the public clarification issued by FTA a tax registrant can claim input tax in the UAE only when tax invoice is received, and payment intention is made. Hence, in given example, the tax invoice was received in July 2019 even though it was prepared for the 25th March date. This is a non-compliance from the side of the supplier.

If the company upon receipt of the tax invoice makes the payment or payment intention/approval is made in July 2019, then the company will be eligible to recover the input VAT in the tax return for the month of July or subsequent return. It is also advised to have documented evidence that the invoices are delivered only in July and payment approval is made after the receipt in July.

Company XYZ is a VAT registered company under UAE VAT Law. They are in the construction industry and are having a monthly VAT return. From one supplier they have received a tax invoice on 13th January 2020. Due to internal approval and verification procedures in the company, the invoice was accounted for in the accounts department only on 30th March 2020.

As per the public clarification issued by FTA, a tax registrant can claim input tax in the UAE based on normal input recovery rules only after the tax invoice is received, and payment intention is made. As per the UAE VAT Law, the company can claim the input vat on the expense incurred for making taxable business, in the first tax return or the subsequent tax return after the conditions for input recovery is satisfied.

In the provided example, the company is having a proper trial of the invoice received to date and its approval process to prove the payment approval is made in March 2020. Considering this we can state that the first period satisfying both invoice receipt and payment intention is in March. Hence, the company can consider the tax invoice for input VAT recovery of the tax period in March 2020.

Company XYZ received a tax invoice from the insurance vendor (Medical insurance for employees) dated 1st April 2020. Company will be making the payment in 4 instalments as below;

Can the company claim full input VAT in tax period April even though the payments are scheduled in 4 instalments?

The given transaction is a continuous supply where service provided for a period of 1 year, but payment is agreed in multiple instalments. The date of supply of the transaction will the earliest event which is the tax invoice date in the given case. A tax invoice for the full supply is issued on 1st April 2020.

As per the public clarification, a taxable person can claim this input tax in the UAE when it has received the tax invoice and the payment intention is made. So, the company can claim the total input VAT in the April month itself based on the tax invoice received.

Company ZYX is a tax registrant under UAE VAT having monthly VAT return filing. The company received a Tax invoice on 20th July 2019 and claimed this input VAT for tax period July 2019 itself. The due date for payment was after 40 days from the date of the invoice which means on 30th August 2019.

But the company did not make the payment to the supplier till May 2020 because of some cash flow difficulties. Is there any Tax adjustment required?  Also, what should the company do if it makes the payment on 10th May 2020?

In the above example, the company received the tax invoice on 20th July 2019 and included in the input claim within the prescribed period mentioned itself. At the time of booking that invoice, the company had the intention to make the payment within 30th August 2019, so they claimed input VAT in accordance with the provisions.

But the company could not make the payment even after 6 months from the due date. As per the clarification provided by FTA, when a taxable person fails to make the payment within six months from the agreed date of payment, he should reduce the input tax in the VAT Return for the tax period after the expiry of the six-months. But if the payment is made in the future then the taxable person will again be entitled to recover the input tax in the UAE.

In the given example, since the company has failed to make the payment within 6 months from the agreed date of payment, it should reverse the input VAT in the next tax period immediately after six month period ending ie, after February 2020. The company will be eligible to recover the VAT later after making payment, if it makes the payment on 10th May 2020 as mentioned in the example.

Looking for TAX Service in the UAE? We are happy to assist.

For Tax Services in Dubai:

For Tax Services in Abu Dhabi: