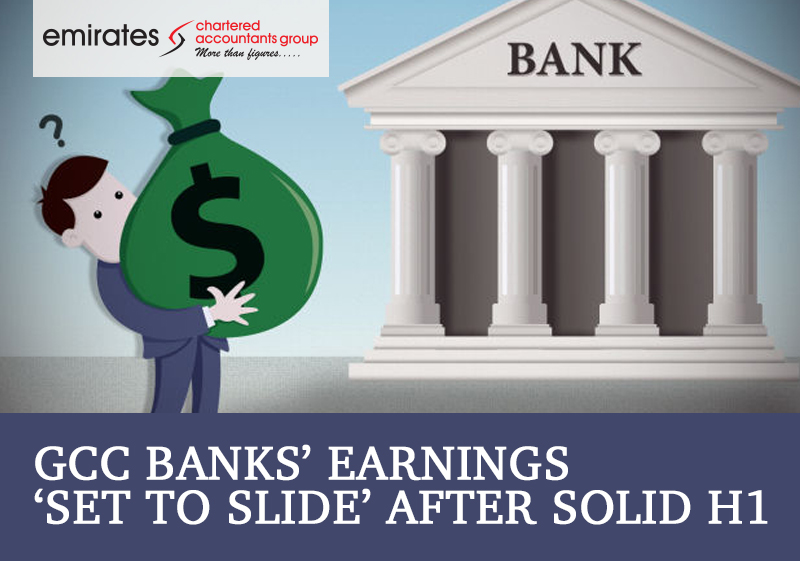 Banks in the GCC, which reported a good set of gains in the first half of 2015, could see a weakening in earnings over the next several quarters due to the knock-on effects of lower oil prices on growth and asset quality, a report said.

That's according to Standard & Poor's Ratings Services' report, "Gulf Banks: After Solid First-Half Results, Earnings Are Set To Slide," published today (October 1) on Ratings Direct. The analysis is based on a sample of 26 rated banks in the GCC, which comprises Bahrain, Kuwait, Oman, Qatar, Saudi Arabia, and the UAE.

"In line with our expectations, banks seem to have adopted a more conservative stance in terms of asset growth, given the drop in oil prices and its effects on the region's economic outlook," said Standard & Poor's credit analyst Suha Urgan. The deleveraging of government-related entities (GREs) in Qatar, tighter mortgage regulation in Saudi Arabia, and a drop in real estate transactions in the UAE also held back asset growth.

In the UAE in particular, several banks saw a sharper slowdown due to the draw down of deposits from the government and GREs.

"Customer deposits in Saudi Arabia were relatively more resilient during this period," said Urgan. "But, we note that six out of the 26 banks we rate in the Gulf reported negative deposit growth in the second quarter."

"Signs of weakness are evident in both interest income and noninterest income," said Standard & Poor's analyst Timucin Engin. "Simply put, the squeeze on interest margins has not yet eased. Low interest rates are returning less on bank assets, but funding costs are gradually increasing."

Out of the 26 banks in Standard & Poor's sample, 10 posted a year-on-year contraction in non interest income in the first half of the year. Other areas of weakness were a contraction in fees for loan origination, brokerage, and capital market activities.

"Over the past few years, GCC banks' declining credit losses were a key driver of earnings growth and resilience in return on average assets," said Urgan.

"But after five years of decline, credit losses are set to rise for Gulf banks as they cope with slowing growth and capital market volatility. We expect Gulf banks' net income growth to decline below 10 per cent in 2015 and potentially slow further in 2016."