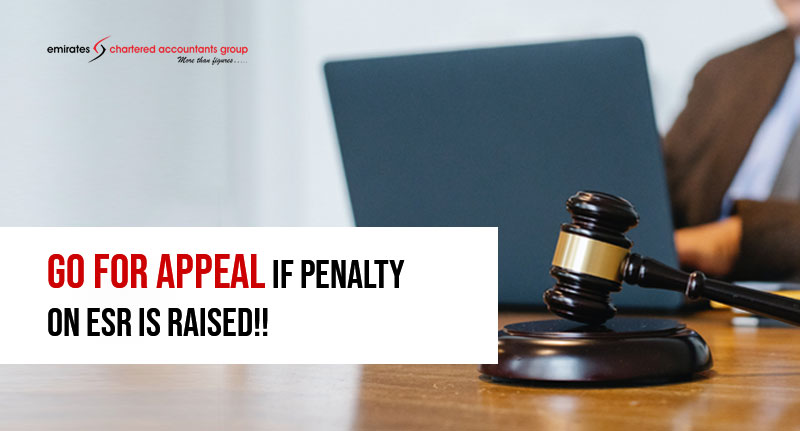 Go for an appeal if the penalty on ESR is raised.

Did you get any response from the authority is after that?

Many licensees in the UAE have come across penalty emails from the Ministry of Finance.

Did you get any such penalty email?

If yes, do you know how to resolve the issues? In order to resolve such issues, we should know exactly the reason for receiving such a penalty ticket from the Authority. We have listed down some of the reasons why you might have received penalty emails:

In such a Scenario, ABC LLC filed the 2nd Report with Distribution & Service Centre as Relevant Activity and no action against 1st generated Report. Penalty for non-submission of Economic Substance Report before the deadline might be activated on the Dashboard.

Economic Substance Report was not filed since Exemption (along with supporting evidence) was filed. Still, the penalty ticket may raise.

How to waive off the penalties generated from situations like above?

In the above-given scenarios, the Licensee or Exempted Licensee will have the option to Appeal. Appeal Tab is available on the Ministry of Finance (MoF) portal dashboard. It is important that all supporting evidence along with a detailed explanation is necessary for Appeal.

Article 13 & 14 of the Economic Substance Regulation provides the offences & penalties for failure to provide Notification and Report, respectively.  The administrative penalty will be levied on that Licensee or Exempted Licensee who fails to submit Notification & Report (wherever applicable) as below:
Failure to submit    Penalty Amount

If there is a delay in submitting Economic Substance Notification or Economic Substance Reports, and if such delay is because of the ignorance of the Law, the chance of getting approval for waiving off the penalty cannot be assured through an appeal.

But there are genuine cases as mentioned at the beginning of this article, where the penalty can be appealed and removed. We are happy to resolve your issues by submitting the Appeal to the Authority.

Please get in touch with us for any advisory support & guidance in this regard.