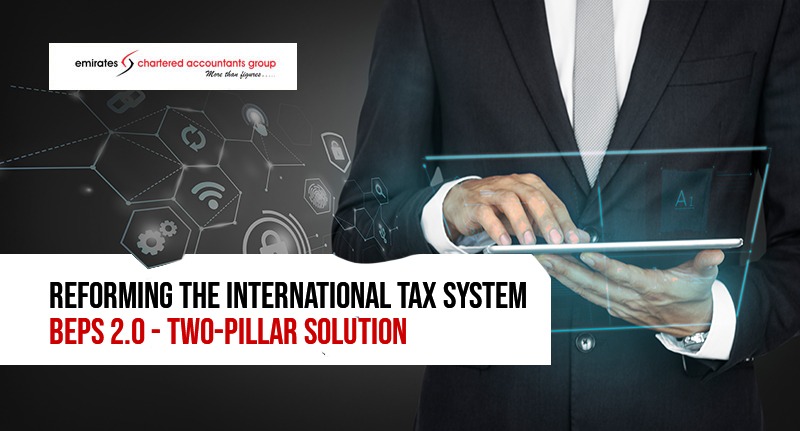 Over the past years, the international tax environment has remained in flux and has become increasingly complex.

The Base Erosion and Profit Shifting project, known as BEPS, started in February 2013.

BEPS seeks to address tax planning strategies that exploit gaps in tax rules to artificially shift profits to low or no-tax locations where there is little or no economic activity, or to erode tax bases through deductible payments.

The original BEPS Package (BEPS 1.0) introduced in 2015, provided 15 Actions that equipped governments with the instruments needed to tackle tax avoidance. The Multilateral treaty (‘MLI’) that enables jurisdictions to swiftly modify their bilateral tax treaties to implement measures designed to address multinational tax avoidance is the outcome of the BEPS 1.0 Project.

In 2019, BEPS 2.0 proposed a two-Pillar solution to ensure that large Multinational Enterprises (MNEs) pay tax where they operate and earn profits while adding much-needed certainty and stability to the international tax system. The blueprint of these rules was released in October 2020, according to which the rules will apply to MNEs with a total consolidated group revenue above stipulated threshold limits.

• Pillar 1: Addresses the tax challenges of the digitalization of the economy and allocation of taxing rights; and
• Pillar 2: Introducing a global minimum tax regime

The key components of each Pillar as proposed are discussed hereunder:

Pillar One will ensure a fairer distribution of profits and taxing rights among countries with respect to the largest MNEs, including digital companies.
It would re-allocate some taxing rights over MNEs from their home countries to the markets where they have business activities and earn profits, regardless of whether firms have a physical presence there.

The blueprint on Pillar one contains three elements:

Processes to improve tax certainty through effective dispute prevention and resolution mechanisms.  It has been ensured that the incidence of Double taxation of profit allocated to market jurisdictions will be relieved using either the exemption or credit method.

Pillar Two proposes a minimum tax on corporate profit, putting a floor on tax competition. Governments worldwide agree to allow additional taxes on the foreign profits of MNEs headquartered in their jurisdiction at least to the agreed minimum rate.

This would mean that tax competition would now be backstopped by a minimum level of taxation (proposed 15%) wherever an MNE operates.
The blueprint provides technical details on the design of the Pillar two system of global minimum tax rules. Pillar 2 consists of two interlocking domestic rules and treaty-based rule as under:

The Pillar Two system of global minimum tax rules include

The GloBE rules will operate to impose a top-up tax using an effective tax rate test that is calculated on a jurisdictional basis and that uses a common definition of covered taxes and a tax base determined by reference to financial accounting income.

The operation of the IIR is, in some respects, based on traditional controlled foreign company (CFC) rule principles and triggers an inclusion at the level of the shareholder where the income of a controlled foreign entity is taxed at below the effective minimum tax rate.

The UTPR serves as a backstop to the IIR by providing a mechanism to collect any remaining top-up tax in relation to foreign profits that are not in the scope of an applicable IIR.

The treaty-based rule, the STTR, is projected to complement GloBE Rules, rather have priority over the IIR and will allow developing countries, through bilateral treaties, to impose limited source taxation (withholding taxes), within the range of 7.5%–9%, on certain related-party payments.

It acknowledges that denying treaty benefits for certain deductible intra-group payments (eg: interest, royalties) made to jurisdictions where those payments are subject to no or low rates of nominal taxation may help source countries to protect their tax base, notably for countries with lower administrative capacities.

It is contemplated that the proposed Two-Pillar solution is expected to be brought into law in 2022 and to be effective in 2023, once the Inclusive Framework members agree and release an implementation plan.

BEPS 2.0, especially Pillar two, would impact countries with low or no tax systems, such as the UAE, which benefits from a limited corporate tax system (only branches of foreign banks and the oil and gas sector are subject to tax). All Companies in UAE, whether in mainland or free zone, are likely to see changes in its tax landscape with the introduction of Pillar Two.

Given the ambitious timeline for implementation, it is important that potentially impacted businesses i.e., MNEs undertaking intragroup transactions and having the consolidated turnover in excess of threshold understand what is coming, and prepare for the resulting changes.