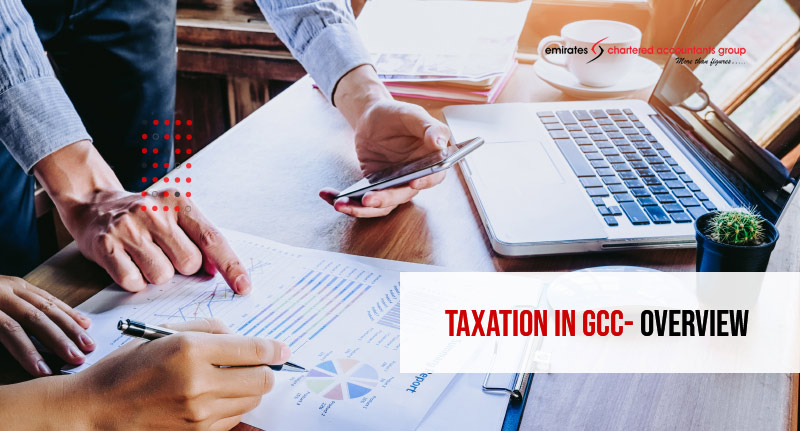 VAT in GCC Countries-Taxation in GCC

Although taxation has a long history in the world, it played a relatively minor role in the Gulf Region until 2015. The Countries of the Gulf Region are colloquially known as GCC Countries.

GCC is a regional intergovernmental political and economic union for the Arab Countries of the Gulf, also known as Gulf Cooperation Council (‘GCC’). All current member Countries of GCC are monarchies.

The Charter of the GCC was signed on 25 May 1981, formally establishing the institution. There have been discussions regarding the future membership of Jordan, Morocco, and Yemen.

GCC Countries have been relying on their oil reserves for fulfilling their economic obligation and their growth. However, post-reduction in the price of oil and the global rise in alternative sources of fuel, it has become difficult for them to maintain a balance between fiscal stability and economic growth. This has given rise to the introduction of taxation: direct and indirect by most of the GCC Countries, most prominent being Value Added Tax (‘VAT’).

In the past, foreign entities have made their headquarters in this region lured by the zero/lower taxation policy. This arouses concern about probable tax evasion by these entities. Many of the GCC Countries were considered non-cooperative jurisdiction for the purpose of tax by the Organisation for Economic Co-operation and Development (OECD). Some of these Countries were even added to the blacklist category by the European Union. To mitigate the risk of any punitive measures by the international authorities and to remove their names from such blacklist, the GCC countries are in the process of pursuing unprecedented economic structural reform. This has culminated in bringing up governance in their tax regime and disclosure policies.

In this regard, one of the measures undertaken by the GCC Countries is to plug the loopholes in international tax law by increasing transparency between jurisdiction, tax authorities and taxpayers and align the taxation of profits with the true location of economic activity.

The Reason Behind the Various Regulations like ESR, CbCR etc in GCC

The major step towards this has been the initiation of efforts to join the inclusive framework on Base Erosion and Profit Shifting (‘BEPS’) as recommended by OECD. As a result, GCC Countries have started introducing various Regulations requiring disclosures of the organisational structures and nature of activities. To this effect, the UAE introduced CbCR (Country by Country Reporting) and (ESR)Economic Substance Regulation in the year 2019. The UAE introduced a procedure to furnish details of the Beneficial Owner in the year 2020. Introduction of Transfer Pricing Regulations in near future cannot be ruled out.

Herewith is the Snapshot of Regulations Relating to Taxation (Direct and Indirect) Prevalent in the GCC Countries. (CLICK HERE)

The dynamics of taxation in the GCC Countries are evolving.  Introduction of new regulations results in new and elaborate compliance procedures and the requirement for the entities having business in these countries.  Foreign investors seeking to do business in these countries are required to ensure that they keep abreast with the amendments in existing regulations as well as the introduction of new regulations and reassess their tax exposure and risks.

While GCC Countries are attractive investment options due to its light tax framework and minimal taxation policy, the introduction of new taxes is worth a watch out for, to strategize your business plans.

This material has been prepared based on the data available on 03 November 2020 in the public domain. The intent of this document is for information sharing only and does not constitute any professional advice. Emirates Chartered Accountants Group does not accept any responsibility or assume any liability for the consequences in reliance on any information in this publication. You may consult us or any other tax advisors before taking any decision based on this publication.

For Support in Taxation in GCC