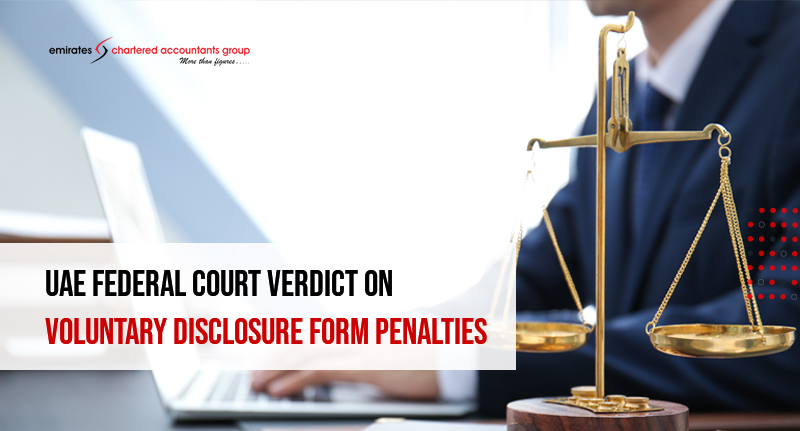 Federal Court Verdict: October of 2020 was rather a significant month for the tax registrants of the country as FTA rolled out multiple clarifications and guidelines shedding light on various grey areas of tax laws in UAE. We have, in detail, discussed the clarifications through our online platforms.

•    Fixed penalty of : a) (3,000) for the first time. b) (5,000) in case of repetition
•    Percentage based penalty shall be applied on the amount unpaid to the Authority due to the error and resulting in a tax benefit as follows:

Further, where a Taxable Person fails to settle the Payable Tax stated in the submitted Tax Return or Tax Assessment he was notified of, within the timeframe specified in the Tax Law shall be obligated to pay a late payment penalty consisting of:

•    (2%) of the unpaid tax is due immediately once the payment of Payable Tax is late;
•    (4%) is due on the seventh day following the deadline for payment, on the amount of tax which is still unpaid.
•    (1%) daily penalty charged on any amount that is still unpaid one calendar month following the deadline for payment with upper ceiling of (300%).

Though these provisions of the Resolution may seem straight forward, there are some confusions which has been crept in. Let us have a closer look at these grey areas of the resolution.

The decree clearly states that there are fixed and flexible penalties involved in filing a Voluntary Disclosure Form but also states that there will be penalties on unpaid taxes from such original date on which he was obligated to pay tax to the Federal Tax Authority.
There is a visible confusion here which we believe the reader has already contemplated. Let us take you through an example to ward off any confusions whatsoever.

Consider a scenario where ABC LLC, a tax registrant in Dubai, during an internal audit review identified that they missed out to account few sales in the system and disclose the same in his tax return. ABC LLC, as per their advice received from their tax advisors, are filing a Voluntary Disclosure Form for that particular tax period to rectify this error.

ABC LLC understands that they will have a fixed penalty of AED 3,000 while accessing the VDF and an additional 5% penalty on the unpaid tax as he is disclosing this voluntarily without any notification from the FTA.

But, upon filing, ABC LLC noticed that the penalty is much larger than they had anticipated. While reviewing further, it was identified that the FTA system has charged non-payment penalty to their account. To their surprise, such non-payment penalty has been computed from the original due date of the return for which ABC LLC filed VDF.

This how the subject matter became a dispute and moved to the Federal Supreme Court of UAE.

Observations of the Court

The honourable court observed that

a) the relation between the Federal Tax Authority and the taxable person is not a contractual relationship but an organized one, ruled by peremptory legal rules.

d) Inaction of paying the due tax in due time requires applying the outage cost whether it is stated in the return or the voluntary self-certification.
Let us take you through the crux of the Federal Court Verdict. The honourable Court ruled that irrespective of whether a Voluntary Disclosure Form is filed, non-payment penalty will be levied on the non-payment from the due date of the tax return and not from the date of filing the Voluntary Disclosure Form.

This decisive ruling from the Federal Court culminates a long-standing disparity in the interpretation of the law.  Even as we agree that this decision might have a huge financial impact on the businesses, it is rather imperative to have a foolproof tax system to avoid such compliance costs. A pretax audit review of your organization can go a long way in identifying the gaps between UAE tax law and your tax systems and can help you take proactive decisions in the changing compliance landscapes of the country.

Looking for TAX Services in the UAE?