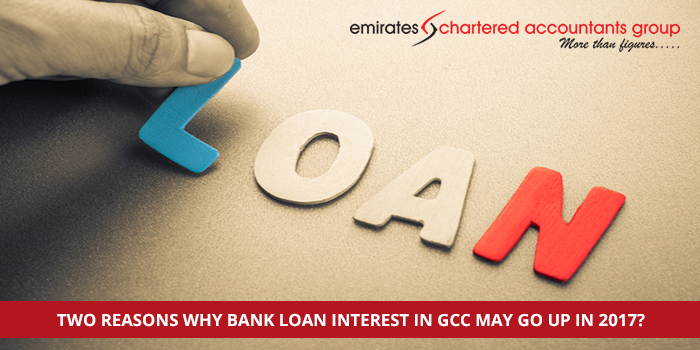 There are two main factors which are going to affect the loan interest rates in GCC banks in the year 2017. One is the impact of increase in US Fed Rate and the other is the possible reduction of deposit growth in the banks.

Except a nominal hike made in the Fed rate in the month of December 2015, it was constant nearly for the last decade. In the year 2015, the authority gave a signal of possible multiple rate hikes in the year 2016, but the scenario of the year 2016 was totally different. The US economy didn’t pick up as expected. Oil price didn’t rise, and rather it went down even further. The stock market crashed. Altogether only negative signs were seen and the decision on the Fed rate hike was postponed till end of the year 2016. At last the widely-anticipated US Fed rate hike was announced on 14th December by 0.25%. It is expected to increase multiple times over the course of the current year 2017. This hike had an immediate impact on the rest of the economy including GCC countries. The Central Bank of the UAE raised its Certificate of Deposit rate by 25 basis points. This will ultimately lead to an increase in the interbank borrowing cost. Since there is a strong indication of the Fed Rate being increased multiple times in 2017, the possibility of increasing the above interbank borrowing cost is higher. If that happens, the banks will be forced to spread the cost to their customers and hence the borrowing cost for the companies and individuals will go up. A quick study of available market analytics shows no surprises in terms of the oil price for 2017, only indicating the possibility of a marginal increase. A continued lower oil price in 2017 will result in the further decline of government deposits as well as deposits from oil companies into the banks. This reduction is expected to create a rather critical situation in GCC banks pertinent to funding, which will in turn lead to increase the cost of fund to its customers. In such a situation, the home loan rate will go up in 2017, since these rates in UAE are pegged with EIBOR. As the EIBOR raises, the effective rate to the customers will go up. In the case of personal loans, in most of the cases, the rates are fixed for a term, hence there won’t be any change for such customers; however, the new borrowers may have to bear a higher cost. In the case of credit cards, there is no chance of increasing the interest cost, since the present rate itself is very high in most of the cases. At the same time, the condition of auto loan will be similar to that of personal loan. In the case of corporate finances for the companies, most of the fund costs are a fixed profit margin plus EIBOR rate and in some cases it is fixed rate as personal loan. Hence the impact of cost of fund for the companies will be a blend of home loan and personal loan.
Categories
Recent Posts
This website uses cookies to improve your experience. I acceptYou can Read More here Learn More By continuing to use this site you are giving us your consent to do this